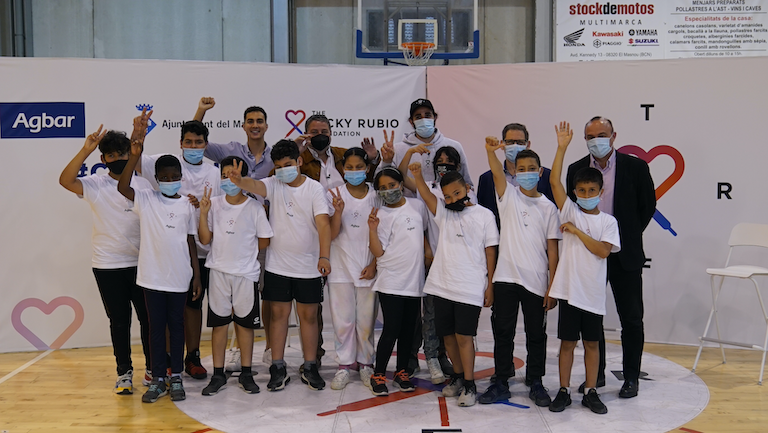 The Ricky Rubio Foundation‘s Community Team project was presented in El Masnou in partnership with the Masnou City Council and Agbar on wednesday, an initiative that consolidates the social significance of the commitment of world-class athlete Ricky Rubio in the field of protection and integration of the child population that suffers the most inequalities.

In this case, Ricky Rubio has wanted to act locally in collaboration with the City Council of his town, El Masnou, and in alliance with Agbar, sponsor of services and supplies, which has also stressed the importance of establishing solid and lasting links with a territory as important and sensitive in terms of sustainability as is the Maresme.

The presentation, in the format of a telematic press conference, was attended by the Mayor of El Masnou, Jaume Oliveras, the CEO of Agbar, Emili Giralt and the president of The Ricky Rubio Foundation, Esteve Rubio, all of them surrounded by the Masnou international and NBA star Ricky Rubio at the Masnou Pavilion Sports Complex, where previously the children benefiting from the program had a Community Team session with him.

“For me it is something very special to be here today starting a project that makes me really excited. You can imagine why, it is done in my house and with the help of my Foundation in favor of boys and girls that we can help to have a life like other children of their age. We can help them to do group sports and, while they train and play, learn values and skills that will make them stronger and more independent to face the problems of real life. It makes me very happy to lay this first stone, so I want to thank the help and support of the City Council of El Masnou and Agbar“, said Ricky Rubio, who also commented on the general aspects of the season in the American championship.

The mayor, Jaume Oliveras, expressed, with satisfaction, what the Community Team project represents, opening a new frontier in the format of social responsibility. In March 2018 the City Council signed the collaboration agreement with the Ricky Rubio Foundation and on September 8 of the same year the track that bears his name was inaugurated. “It is a source of pride for Masnou to pass the name of our municipality around the world. And even more so, with the seal of collaborative projects, such as the one we are presenting today, of a social and inclusive nature through sport: it began in April, with the Maricel Open Center, with 11 boys and girls taking part.” Asked about the planned improvements in infrastructure “by the government of Masnou are the expansion of the sports complex -still in the projection phase- and the creation of the Vallmora Park outdoor sports track that has already been recently budgeted, with more imminent character“, said Jaume Oliveras.

Agbar’s CEO, Emili Giralt, stated that “Ricky Rubio represents dedication, effort and commitment. To transmit these values, we support the Community Team project because it is focused on young people in vulnerable situations. We have this sensitivity because we manage a service in which we have to deal with vulnerability on a daily basis and provide solutions“, he explained. He also referred to the company’s approach to social responsibility projects: “One way of repaying the trust placed in us by El Masnou is to support a social inclusion project such as Ricky Rubio’s. We carry the social concept in our DNA. We carry the social concept in our DNA“, Giralt explained and stressed that “we are committed to a strategy of digital transformation and sustainable development to address climate change. We are a basic service and we guarantee a quality service so that everyone has water, but we also help Masnou in this environmental and social transformation“.

The Community Team project is aimed at children and young people with the objective of forming, through the practice of basketball, competent and reflective people for life. The practice of sports allows the integration of the lessons learned in training for any context of everyday life, so that the basketball court also allows the training of life skills. Thus, it is a common goal for the Community Team project and the Maricel Open Center to contribute to the integration and socialization of children and adolescents, as well as to work on values and the management of emotions. The City Council of Masnou and Agbar have supported to be able to release, now officially, the Community Team in the Open Center Maricel dell Masnou by the hand of Vidal Sabater as coach and pedagogical responsible and Yolanda Montero, monitor of the project.

This activity is part of the center’s school hours, weekly, from 17:30 to 18:30, at the Ricky Rubio track of the Municipal Sports Complex of El Masnou. Since 2018, The Ricky Rubio Foundation has validated Community Team in the Raval neighborhood of Barcelona with more than 250 boys and girls working, thanks to sport and with groups of young people, fundamental aspects such as coexistence and non-discrimination for reasons of gender, race, religious, economic or social beliefs, among others. The program transmits the 10 Life Skills defined by the World Health Organization as essential to form the best citizens of the future. Also in the neighborhood of Font de la Pólvora in Girona, the project associated with basketball, initiated in 2019 as part of a comprehensive plan of education in values through 3 axes: sport, culture and education.

The president of The Ricky Rubio Foundation, Esteve Rubio, could not contain the emotion of being present at an event that “strengthens Ricky Rubio’s bond with his town, which is that of the whole family, and that gives institutional form to this relationship with Masnou. We have already done other activities and collaborations; however, this one gives meaning, continuity and identity to the Foundation that Ricky imagined and that is now a reality. We must hope, I am sure, that this is a very important first step of a very interesting and socially profitable collaboration“.