The Ricky Rubio Foundation Hall is already a reality 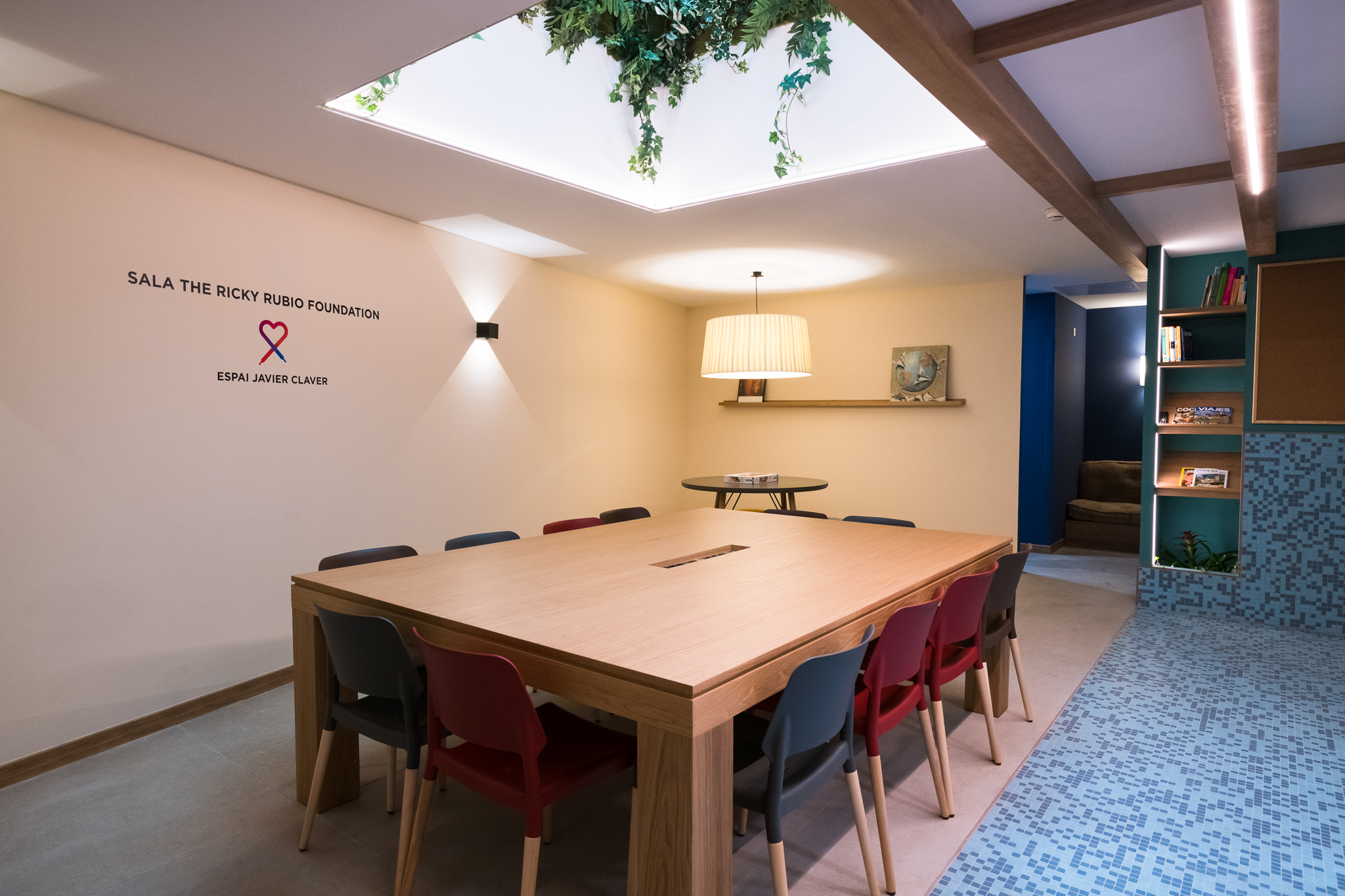 On September 18th, it will go down in the history of The Ricky Rubio Foundation as one of the most remembered and emotional on the occasion of the inauguration of the Dexeus University Hospital Hall, a specially designed and conditioned space for patients on cancer treatment to enjoy from a different environment than the clinical. A comfortable, useful and welcoming space that offers leisure and entertainment options, also for family and companions.

That was one of Ricky Rubio’s dreams when he decided to launch his Foundation, the creation of a unique hospital stay that would improve the stay of that specific type of patients. His intention is now to evaluate its operation and replicate these types of habitats in other centers.

The opening coincided with the happy return of Ricky Rubio from the Chinese Basketball World Championship in which he was proclaimed champion and was chosen MVP of the final and the tournament and one of the members of the five ideal. Unbeatable performance of the athlete of El Masnou who returned home with the gold medal, but especially with the illusion of seeing one of his projects developed by his Foundation culminated.

The expectation, as a result of his extraordinary World Cup, caused the Auditori of the Dexeus University Hospital to remain small, invaded by journalists, the technical and medical staff, the center, patients and the collaborators who have made possible The Ricky Rubio Foundation Room. Ricky Rubio thanked very specially to them for their contribution. He cited the family and friends of Marc Vergès, ‘Superheroi’ of Besalú, whose great dream as a chef, a Food Truck that he could not see come true, has finally served to raise funds for the Hall. The patient Manuel Rodríguez, from Mataró, sensitized his neighborhood and the SS School of Dance, which organized a great dance festival for the benefit of the project. On the other hand, the painter Beth Batlle, whose daughter is still in treatment, fighting for more than ten years against cancer, has organized an auction of her works and other artists for the same purpose.

The moment when Ricky Rubio was able to thank them personally in the Hall, a direct and very emotional connection was established because that is the type of Foundation that Ricky wants, a meeting place in which those personal gestures, so significant, add to the sponsors that like Belloch / Santa & Cole, Fundació IOR, Dexeus University Hospital, Dexeus Women’s Foundation, Vertix, ledbcn, LVP Professional Videogames League, Pangaea Oncology, Guest Studio, HP, Endesa or Agustí Creus’ family, private donor, and the writer Eduardo Mendoza, who has participated with specially dedicated books, have contributed with all kinds of materials, logistics and donations.

Ricky Rubio wanted to share the moment and the project with Víctor Claver, teammate on the national team, accompanied at the presentation table of Dr. Santiago Viteri, medical coordinator of the Rosell Oncology Institute, through whose Foundation originated and forged the idea of ​​starting this Room that is already a reality.

Ricky Rubio explained that his teammate Víctor Claver is like a brother with whom he has lived not only the long road to win the World Cup, an extraordinary sporting success, but also the traumatic loss of a parent, both because of cancer. The Ricky Rubio Foundation Room will also be called Espai Javier Claver in memory of Víctor’s father, a detail that defines and confirms Ricky’s willingness to turn his Foundation into an institution where to share projects and dreams, open to all. “Ricky is also the MVP off the court” said Victor Claver, excited, to questions from Joan Antoni Casanova, journalist and host of the event.

The purpose of this space, located next to the oncology Day Hospital of the center, is to provide emotional and physical well-being to patients and their families. A small oasis to disconnect from the hospital environment, in which to share experiences with other patients or professionals. The room has a reading area, a chill out area and a video games zone.

Jèss Dellà, the designer and creative of the transformation of what was a clinical stay in a unique space for a new experience, in an urban oasis as she said, explained the details of the Hall, where the inspiration and decisions came from structural and aesthetic that responded to Ricky Rubio’s desire for multifunctionality.

Last year the basketball player launched the Ricky Rubio Foundation with the double objective of raising public awareness of lung cancer and participating in projects that help patients’ well-being. From the beginning, the foundation has the support of the Dr. Rosell Cancer Institute, at the Dexeus University Hospital and from that collaboration the project for the new relaxation room was born.

“For a long time, one of the ideas that prompted me to create my own Foundation was this room that today has come true,” said Ricky Rubio. “From my experience and feelings I thought that, among the actions that my Foundation develops in the field of the fight against lung cancer, a space of this type, designed to provide comfort, support and emotional help to patients and families in treatment, It was also an effective way to help, ”he explained to an expectant audience.

“Since the foundation we favor prevention and research, these are highlights, no doubt key, but there is also the human factor,” added Rubio. “The personal burden of coping with such a disease for days and months. That is very hard. The Ricky Rubio Foundation Room will serve to alleviate as much as possible the complicated moments of the treatment and serve as a space for medical workshops, work, leisure, rest, wants to be multifunctional and above all very cozy, separate it from the clinical environment to make the hospital stay more bearable. That is why I wanted to share it with a teammate who is above all a friend, a game brother, what is a lot, like Victor Claver, whom I have asked to accompany me and endorse this initiative. In fact, the room will also be named after his father Javier Claver who died of cancer. As in everything in life, today we inaugurate it with the idea of ​​improving it with its operation and the illusion of replicating it in other centers, but with the determination and hope that someday, when we can fight this disease together, they are no longer necessary. Thank you very much to all who have made it possible.”

“Cancer affects all dimensions of a person’s life,” explained Dr. Santiago Viteri. “The oncologist concentrates his efforts on the diagnosis and treatment of the disease, but we are aware that the suffering of our patients rather than physical patients are mental, emotional or family and cannot be resolved by prescribing medication.” said.

Cancer treatments often lead to long waits and hospitals, in general, are cold and unpleasant. And speaking with Ricky, we saw that it didn’t have to be this way and we decided that doctors, patients and family members could create a community of mutual support if they had a suitable meeting place; that waiting times could be filled with literature, music and all kinds of art that helped temporarily forget fears; that the expectations could be used in training and workshops that would help the lives of all of us not necessarily revolve around cancer, ”he added.

Dr. Núria Solé, manager of the Hospital Universitari Dexeus said that “initiatives such as the implementation of this space for cancer patients and their families are part of the DNA of our center and the Quirónsalud group whose main objective is always to improve the experience of our patients”.

In that sense, the new room will also become a space for participation in which oncoesthetics and nutrition workshops will be held among others to contribute to the improvement of the quality of life of cancer patients.