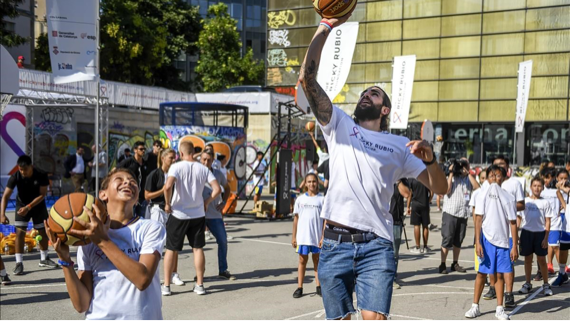 A year after the opening of The Ricky Rubio Foundation, on the 19th of July 2018, the enthusiasm, and the willingness to keep developing projects or look back at the ones which are ongoing has doubled the dream of that first day at Plaça Terenci Moix, Raval, Barcelona were we let the world know about our identity and objectives.

We explained that thanks to the resources given, partners, helpers, donations, volunteers, effort and with everyone’s collaboration we will achieve our objectives towards fighting and creating campaign to raise awareness against lung cancer between adults and children, to help in giving opportunity and values through sports to children in risk of social exclusion and also to include everyone in sports with the support of The Special Olympics.

The Ricky Rubio Foundation has had a lot of impact with the media to become a reflection of the leader, Ricky Rubio, a professional NBA athlete playing for The Phoenix Suns. Rubio does not understand life without involving himself into social activities. “Playing basketball, even if you are good at it, it is not enough for everyone to define you as an extraordinary athlete,” said Ricky Rubio.

Today, Ricky Rubio is a basketball star and a person who is involved in leading social projects which are coming together. He leads projects, ideas and collaborations that for him can change people’s lives forever.

Despite the distance between The United States and Catalonia, the areas where most of his projects are taking action through his Foundation, he always has been on alert to feel close to those who are making his Foundation possible, partners and the people who benefit from.

The children from Associacio Esportiva Ciuta Vella have felt close to Ricky throughout the school year. They took part in the Community Team program, which thanks to basketball, the children have learned about social skills and have developed their personalities enough to make the right decisions. Also, the project has been extended to the Font de la Polvora neighbourhood, Girona where next year more children will benefit from it by giving four hundred children the opportunity to learn values through playing sports.

In the context of fighting against lung cancer, The Ricky Rubio Foundation has given shape to different campaigns and projects. The writer Eduardo Mendoza and Dr. Santiago Viteri from Insituto Oncologico Rosell have made a video where they talk about prevention and research to fight against cancer that has a huge impact on the news.

During Ricky Rubio’s appearance at Maratao TV last December,  he played a short film at Masnou Beach where Ricky was born to talk about his mother and he appeared on live television to advise about the consequences of smoking which are extremely related to lung cancer.

RICKY RUBIO AS THE IMAGE OF THE CAMPAIGN AGAINST TOBACCO

Ricky Rubio’s predisposition to fight against cancer called the attention of The Health Department of Generalitat de Catalunya who took on board Rubio to be the face of the new campaign against tobacco. The campaign is directed by social media and aims to stop teenagers between 14 and 18 years old to stop smoking and also to increase the sensibility of parents to do the same. This autumn we will see Ricky Rubio leading social projects that will be key to improving people’s health in the new generations. If you do not start smoking before 18 years old the number of new people who smoke decreases.

LUCA AND HIS EXPERIENCE IN THE NBA

Luca Project was presented on the 12th of July at Vall d’Hebron Hospital. This project is a singular and very personal initiative of Ricky Rubio, who met Luca de la Vega two years ago when Luca was diagnosed with cancer which affected his lungs. When Rubio invited Luca (13 years old) last season to watch an NBA game, Luca received the support of Ricky Rubio and Luca’s family which gave him the strength to be able to travel to Madison, New York and watch a basketball game between The Knicks and Utah. At the end of the basketball season Ricky decided that his Foundation would invite three children from Vall d’Hebron Hospital to watch an NBA game every season under the name of The Luca Project. Luca will be the mentor to help the next children to get through cancer. The opening of Luca Project was very emotional.

The Ricky Rubio Foundation also supports inclusive sports and Rubio also is the ambassador of Special Olympics and for this reason The Ricky Rubio Foundation supported the II Basketball Unified Tournament celebration last summer in Badalona. The next edition of the Basketball Unified Tournament was celebrated in Masnou, at the sports facilities that has Ricky Rubio’s name to thank him for his support.

HELPING TO SAVE THE OCEANS

The new basketball player for The Phoenix Suns, Ricky Rubio, wanted to collaborate with activities led by schools to raise awareness on how important is to clean plastics from the oceans because the pollution in the oceans is growing worryingly. With Sorea support, Ricky collaborated on cleaning the pollution from Masnou beach, his birth town with hundreds of children. Also, he supported Adidas event on cleaning the Barcelona beach through their campaign “Run For The Oceans”.